Welcome to the support portal
Knowledge Base Landing pages

This feature lets you create variants of your webpage for testing purposes. The aim of running A/B/X tests is to refine your landing page in order to maximize conversion rates. An example of A/B/X testing would be to keep the same content while varying colors, images or the display.

In addition to the overall statistics for the landing page, you can see the individual stats for each specific version and hence know which one is rocking the charts. 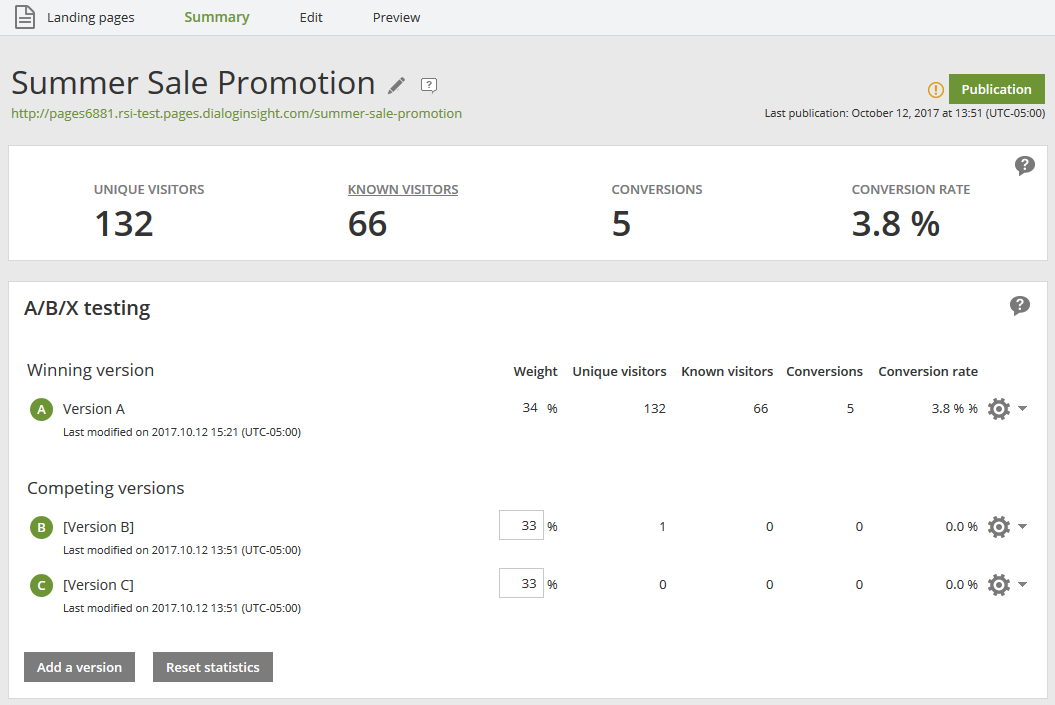 Which version is displayed to visitors?

The display of versions is determined randomly based on the weight of each version, and the information provided from the browser (User Agent) and the visitor's IP address, so that the same version is always displayed to the same visitor, each time. However, a visitor that uses more than one device (PC, mobile, tablet) could view two different versions, and as such would be counted as two unique visitors.

This version is the default landing page that is initially created. If no variations are created subsequently, visitors will only see the winning version by default.

Using the gear icon, you can edit, preview or duplicate this version.

Tip: Finalize all edits to this version before duplicating it to make variations.

These are the variations of the winning version. You can create a variation by clicking Add a version button or by duplicating an existing version and editing the variable(s) under test (best practice).

Using the gear icon, you can do the following: edit, preview, duplicate, reject or Make it the winning version.

For each variation, you must set the weight i.e., the probability this version is served to the visitor. The weight of a variation is subtracted from the control version. For example, if you have one variation and you set its weight to 50%, the visitor has an equal chance of seeing the winning and the competing version.

These are the versions that have been rejected. They are not shown to visitors.

Using the gear icon, you can edit, preview, duplicate, delete or make it a competing version.

Make it a competing version
This option allows a previously rejected version to be shown again to visitors. You will have to assign a weight to this version to make it go live again.

Back to top
Did you find it helpful? Yes No